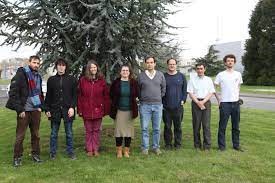 Sara Bolognesi and its team "Neutrino" at Irfu (CEA Paris-Saclay)

Sara Bolognesi received the European Physical Society's Emmy Noether Award, dedicated to women in physics, for developing data analysis techniques that significantly improved the sensitivity of the CMS experiment at CERN, leading to the discovery of the Higgs boson and the first measurement of its spin and parity. The prize was created in February 2013 to strengthen the recognition of outstanding women physicists with a close link to Europe through their nationality or their work.

An adventure at CMS

Sara began her adventure as a physicist at the LHC (Large Hardon Collider) on the CMS (Compact Muon Solenoid) experiment, working on electroweak symmetry breaking, studying more precisely the coupling of the Higgs boson to the ZZ (Z boson is a neutral elementary particle discovered in 1983) or WW (W boson is a charged elementary particle discovered in 1983) dibosons. The Higgs boson was theoretically introduced into the standard model of particle physics in 1964 to explain the mass of particles. Never observed experimentally, the theory assigned it a mass at a certain energy value. If no Higgs signal was detected below the TeV (tera-electron volt), physicists would be entering a new physics! To detect the Higgs boson, we need to look at its decay products and find them among the billions of particles produced every second by proton collisions at the LHC. Sara decided to focus on muons. Muons play a key role in the LHC and CMS, together with ATLAS, has very accurate muon detectors.

Following her thesis, Sara continued in this line of muon studies by tackling the immense preparatory work needed to discover the Higgs boson. Between commissioning the system, calibrating the muon track reconstructions and measuring the background noise, Sara participated in numerous studies to improve the detections. In particular, she was the first author of a paper detailing an improved calibration of the magnetic field of a room in the CMS magnet where the muon detector is housed. This was essential work because the discrepancy between the internal and peripheral measurements of the detector was up to 10%! 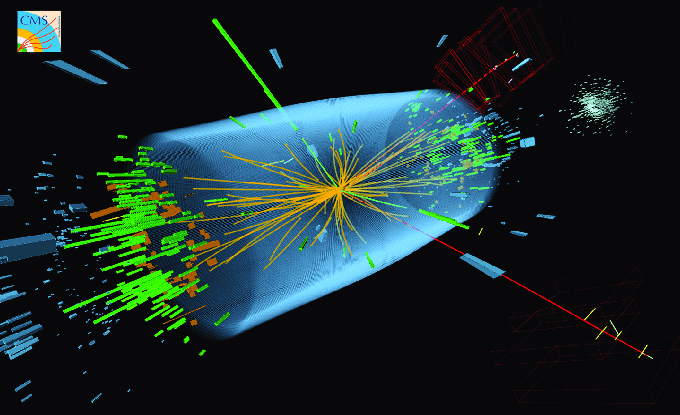 Once the main technical biases were analysed and reduced, Sara participated in the development of an analysis tool: MELA (Matrix Element Likehood Analysis). The aim of this tool is to increase the sensitivity of detectors in the search for the Higgs boson. This tool was an essential key to the discovery of the Higgs boson in the 4-lepton final state, a discovery made in 2012.

A path that continues

After the discovery of the Higgs, Sara set about estimating the limits of the new physics achievable through high-statistics measurements ... until an emerging physics, that of neutrinos, seemed to her to be a more interesting way to get closer to the frontiers of this new physics. Neutrinos were theorised in 1930 to explain an unexplained loss of energy in particle interactions, but this enigmatic particle was not observed until 1956. Since then, scientists have discovered that the neutrino still holds many mysteries: there are three types of neutrino (three flavours) and they oscillate between the three types as they propagate. This implies that there must be three neutrinos with different masses!

Sara is therefore passionate about the study of neutrino oscillation and in particular the crucial questions that remain to be solved: what is the mechanism behind the mass of neutrinos that is still not known? Is there a violation of the Charge-Parity (CP) symmetry in the lepton sector? Does this have implications for the matter/antimatter asymmetry observed in our Universe? 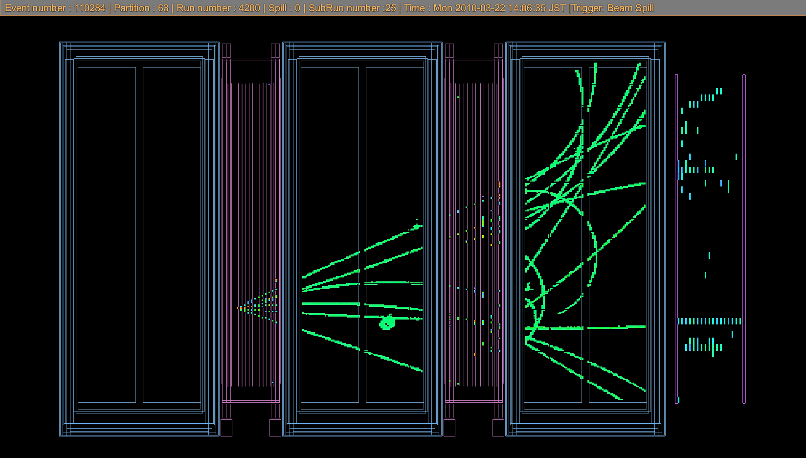 Neutrino interaction event in the detector close to T2K: the green lines are the tracks measured by the Time Projection Chambers developed at Irfu.

To try to answer these questions, Sara immersed herself in the T2K (Tokai to Kamioka) experiment. Sara has helped to improve the analyses, in particular with a finer consideration of nuclear effects in the neutrino-nucleus interaction at the heart of neutrino detection. T2K published the first suggestions for CP violation in Nature in 2020 and will soon start a new data collection with an improved beam and detectors. Sara participates in the Irfu group that is developing a resistive Micromegas detector (MICRO-Mesh GAseous Structure) to improve the near detector for the next data collection.

At the same time Sara is involved in the preparation of the next generation of experiments (HyperKamiokande in Japan and DUNE in the USA) which will be able to establish the existence of CP violation in a definitive way and to characterise the neutrino oscillation with unprecedented accuracy. To Sara's great delight, neutrino oscillation physics is booming!

Sara is therefore the natural leader of the BSM-Nu flagship funded entirely by P2IO (BSM-Nu page).

Find her interview in PES: An interview with Sara Bolognesi: “Every day, I learn something new” - European Physical Society (EPS)